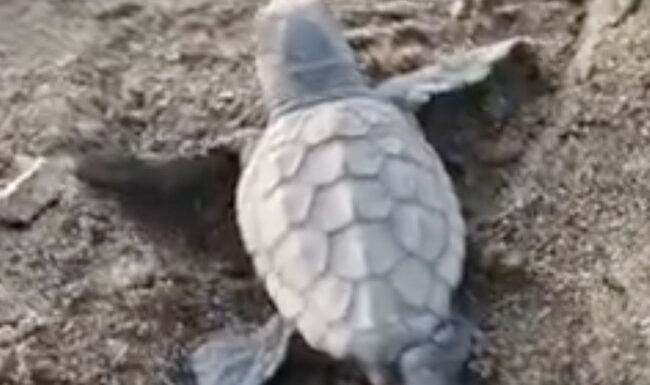 Why is the Caretta caretta (Loggerhead turtle) endangered?

For the Caretta caretta (Loggerhead Turtle), the loss of nesting habit is its greatest threat. This occurs because of coastal development, predation of nests, and human disturbances. Examples of the latter are coastal lighting and housing developments. These factors cause disorientation to the hatchlings, during their emergence.

Loggerheads nest at intervals of two to four years. They lay three to six nests per season, approximately 12 to 14 days apart. She lays an average of between 100 to 126 eggs in each nest. Then the eggs incubate for about 60 days.

This is the source of the above information, edited slightly for readability.

How is Turkey is looking after its’ loggerhead hatchlings?

We set out to see for ourselves. Despite leaving the marina at 5 am, in the dark, it is around 6.30 before we find any activity. That means, it takes over an hour and a half before we find the nest. I record almost all the action I see in the video. Only once, do I forget to press “play” in time.

The video filming occurs at Sahilkent Plagi, Finike, Antayla, Turkey on 24 August 21. We feel very privileged to witness this remarkable event. The particular nest reveals about 30 unhatched eggs, three dead, and ten live hatchlings that we help. So it is more than likely, there is around 110 eggs (average) per nest. Overnight, 67 had already made it to the shore. The little turtle tracks are still visible in the sand, from the night before.